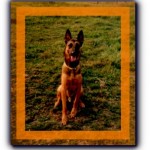 METHODS – The Animal Pyramid Foundation regularly takes care of animals that have no or very little chance of finding shelter elsewhere. A good example of this is Sam, a big bastardised Belgian Malinois that crossed Anne’s path just as he was about to be put down.

Sam was dragged from home to home 22 times in 1 year (twenty-two in one!) and was then found to fall short of the demands society makes on dogs.

When Anne took Sam under her wings he was 15 months old,

thin as a rake and a nervous wreck. Anne decided to first feed him properly and then allow him to calm down completely.

Sam started to relax quickly and adapted to the existing pack of 4 other dogs reasonable quickly as well. Even cats turned out to be no problem for him. Anne started working with Sam to enable him to become a happy, well-balanced animal.

She quickly learned that Sam had a lot of energy to burn off and allowed him to demolish a number of old sofas, together with Tess, a police dog declared unfit for police work. Taking walks and fetching sticks was another part of the daily routine.

After a few months, Sam found a new owner: a single man who was extensively briefed about Sam’s past. Although the man had no problems with that, he called the Foundation three days later saying that Sam refused to eat and that he was such a sad thing to see. Of course, Sam was allowed to return to the Foundation, and the dog that was said to be totally untrustworthy, both with men and women, lived at Anne’s to the ripe old age of 13