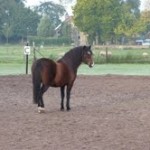 METHODS – This miracle foal was born totally unexpectedly in 2006. It turned out that Nienke, her mother, contrary to all arrangements, had been serviced at her temporary shelter.

Nienke clearly showed some discomfort, but three veterinary surgeons were not able to tell what was wrong with her.  Since Nienke is a rather sturdy, rotund little Shetland mare, nobody noticed what was really the matter. Zafiera was born in March and housed in the scullery, as it was too cold to put her in the stables outside.

Mother Nienke refused to let Zafiera drink and so the Foundation resorted to hand-feeding the foal with bottles. As she lived indoors, the little mare got used to everything: dogs, cats, the washing machine, the vacuum cleaner, the telephone etc. However, after 3 weeks, Zafiera became seriously ill because her body was lacking the antibodies that it would normally receive from her mother’s milk.

Her condition deteriorated by the hour and the vet couldn’t help her. Anne convinced him to put the little one on a drip and to contact the Faculty of Veterinary Sciences at the University of Utrecht. Eventually, a blood transfusion of Nienke’s blood turned out to be the miracle cure and little Zafiera started to feel better instantly.

Not long afterwards, she was able to go outside, where she began her horse’s life together with big pal Bruno. Today, she is a gloriously healthy pony, who loves being brushed and cuddled